In Memory of
Sadie
Assaly (Rigolosi)
1922 - 2017
Click above to light a memorial candle.
Memorial Candle Tribute From
Aloia Funeral Home, Inc.
"We are honored to provide this Book of Memories to the family."
View full message >>>
Send Flowers
Menu 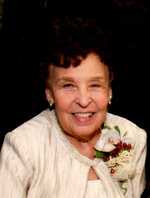 ASSALY, Sadie (nee Rigolosi), age 95, a lifelong resident of Garfield, died on December 3, 2017. Sadie was a waitress for 50 years at the Golden Star Diner and the Park West Diner in Little Falls retiring in 1990, and she was a parishioner of Our Lady of Mount Virgin RC Church, Garfield. She is predeceased by her husband, George in 1993, her daughter-in-law, Joann Assaly in 2017, and her brothers, Michael, Peter, and Gasper Rigolosi. She is survived by her loving sons, Louis Assaly and Joseph Assaly and wife Rosalyn, two cherished grandchildren, April Bini and husband Robert and Leslie Castiglia and husband Anthony, two adored great-grandchildren, Ava and Anthony, two dear sisters, Phyllis Minichetti and Violet Lansalone, and a sister-in-law, Alice Rigolosi. She also was a beloved aunt to many nieces and nephews. Visiting Tuesday 4 to 8 pm. The funeral is Wednesday, December 6, 2017, arriving at the Aloia Funeral Home at 8 am followed by a 9 am mass at Our Lady of Mount Virgin RC Church, Garfield. Interment St. Nicholas Cemetery, Lodi. The Assaly family is in the care of the Aloia Funeral Home, 180 Harrison Ave., Garfield (973-340-7077). Condolences/Directions visit aloiafuneral.com
Order Flowers

Crucifix
The insignias listed here may be subject to copyright and / or trademarked. Those copyrights and trademarks are owned by the respective organizations.
Printable
Share on Facebook