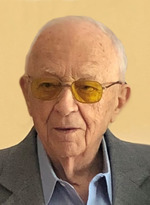 PALATINI, Peter J., age 97, of West Orange, died on December 13, 2019. Born and raised in Garfield for 56 years, he settled in West Orange 41 years ago. He was a WWII Navy Veteran enlisting in 1942. He served in the Asiatic Pacific Theatre from Midway to Iwo Jima with the patrol squadrons UP-71, UPB 104, and UPB 116. Peter was awarded the Distinguished Fly Cross with one Gold Star, the Air Medal with 5 Gold Stars, Asiatic Pacific Campaign Medal with 7 Stars, the Presidential Unit Citation, WWII Victory Medal, Good Conduct Medal, and the NJ Distinguished Service Medal. After the war, Peter remained in the Pacific and was a participant in the Atom Bomb testing of Bikini Island. He left the Navy in 1946 with the rank of Chief Aviation Machinist Mate PA USN. After the service, Peter joined the Carpenters Union and started as an apprentice for 4 years. He worked his way up to Journeyman Carpenter to a Millwright Foreman. He held the positions of Trustee, Vice President and President of the Carpenters Local 1939 in Clifton and was also a delegate trustee of the local to the District Council of Carpenters of Passaic County. He then became the Charter President of the Passaic County Local 124 before retiring in 1987 after 41 years of working. He is predeceased by his first wife, Goldie Palatini in 1976, his second wife, Doris Palatini in 2004, a son, Peter S. in 2014, a daughter-in-law, Janet in 2015, and a brother, George in 2006. He is survived by three loving children, Linda Palatini, Janice Hoyda and husband Joe, and Joseph Palatini, three step-children, Daniel Longo and wife Lucille, Mary and Jeanne Longo, two grandchildren, Jenna and Jarod Palatini, a sister, Josephine Benanti, and three nephews, Robert, Thomas, and Donald Benanti. Visiting Tuesday 3 to 7 pm. The funeral is Wednesday, December 18, 2019, arriving at the Aloia Funeral Home at 8 am followed by a 9 am mass at Our Lady of Mount Virgin Church, Garfield. Interment St. Mary’s Cemetery, Saddle Brook. In lieu of flowers donations are being accepted for the Wounded Warrior Project. The Palatini family is in the care of the Aloia Funeral Home, 180 Harrison Ave., Garfield (973-340-7077). Condolences/Directions visit aloiafuneral.com