To share your memory on the wall of Rosario \"Hoppy\" Lo Faso, sign in using one of the following options:

We encourage you to share your most beloved memories of Rosario "Hoppy" here, so that the family and other loved ones can always see it. You can upload cherished photographs, or share your favorite stories, and can even comment on those shared by others.

Posted Apr 19, 2020 at 09:30pm
Both Hoppy and Anita will be greatly missed by all the Buonos of Gaston Avenue. Hoppy and his family lived across the street from us and he was always a good friend and wonderful neighbor to us all. And when he married Anita, we all got to know and love her as well. They will be remembered as a loving couple who always went to great lengths to be helpful and kind in all that they did. My sisters and I each had our own "visits" with Hoppy and Anita before they left this earth which were moments of great grace and privilege. And my mother and Anita often spoke to each other by phone recently and commiserated about their mutual health challenges. May they rest in peace together...and Hoppy, hoping you get to join our Dad, Frank,and also your long-time friend and fan, on that big golf course in the sky! 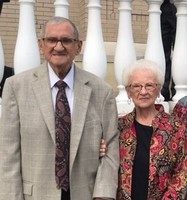