To share your memory on the wall of Bernadette Brincka, sign in using one of the following options:

We encourage you to share your most beloved memories of Bernadette here, so that the family and other loved ones can always see it. You can upload cherished photographs, or share your favorite stories, and can even comment on those shared by others.

Posted Aug 23, 2020 at 02:31pm
"Death leaves a heartache no one can heal; Love leaves a memory no one can steal." Irish Blessing. Deepest condolences to all of Bernadette's family, friends and loved ones.
Comment Share
Share via:
LS

Posted Aug 20, 2020 at 02:09pm
Aunt Bernadette: I love you! I will always remember your whimsical sense of humor and your kind, gentle personality. You are a dear, dear soul and heaven has gained a beautiful new angel. My condolences to all Aunt Bernadette's loved ones, especially Jairo, Dad and Aunt Mary Ann, and all her close relatives.
Comment Share
Share via: 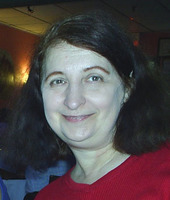